Tokyo is set to restate its claims to a number of disputed islands, as it announces the results of its review of history, geography and other middle school textbooks on Wednesday 30th March.

The Japanese education ministry is expected to announce the results of its educational review, which it carries out every four years, and to stress Japan's sovereignty over disputed territories such as Dokdo, the Kuril Islands and Senkaku.

The expected announcement seems to have provoked the most ire in Korea, who claims Dokdo as their easternmost islets. Korean media sources have seen the move as a 'slap in the face' and proof of Japan's 'hardheaded' attitude.

Only 10 of the 23 textbooks currently in use in Japan have territorial descriptions of the East Sea islets, according to Seoul's foreign ministry, however this is set to rise. The number of textbooks claiming South Korea is 'illegally occupying' the islets is set to rise from one to four when the new textbooks are introduced next year.
The timing of the announcement is unfortunate, as South Korea has been one of Japan's biggest donors as it struggles to deal with the effects of the magnitude 9 earthquake and tsunami that hit it. Seoul says that it plans to continue helping its neighbour, despite the territorial dispute. 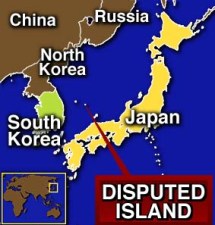 It will, however, issue a statement of regret and call in Japanese ambassador Masatoshi Muto to lodge protests. There are also plans under consideration to renovate a heliport on Dokdo to further the South Korean claim to the area. South Korea maintains a Coast Guard unit on Dokdo as a show of its control and day trips to the otherwise uninhabited islets are common by South Koreans. The waters around Dokdo are rich in fish and natural resources.

Japanese textbooks have long been a thorny issue for the Koreans, and memories of Japan's colonial rule of Korea from 1910-1945 run deep. Yonhap says South Korea considers Japan's claims to the islands to be not a territorial issue, but a matter directly relating to Japan's colonial history and a sign that Tokyo has not fully repented for its militaristic past.

Japan's claim is based mostly on a 1905 notice that a regional Japanese government issued declaring the islets as its territory. South Korea rejects this however, arguing that in 1905 Korea was effectively a Japanese colony and therefore Japan's claims to South Korean territory were voided when Korea regained independence in 1945.

Japan's education ministry is also expected to emphasise its claims over the Kuril Islands, which it disputes with Russia and which has been the cause of considerable tension in recent months following a visit to the islands by Russian president, Dmitry Medvedev.

The Senkaku islands, called Diaoyu by the Chinese has also been the cause of tension in recent months, especially last September when a Chinese trawler was picked up by the Japanese coast guard in disputed areas.