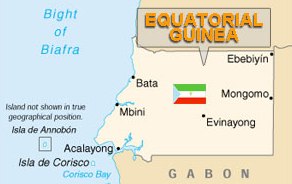 Equatorial Guinea and Gabon have agreed that a UN mediator should settle their territorial dispute over a handful of small islands that hold the key to potentially oil-rich offshore waters.
The foreign ministers of both countries signed a communiqué in New York on 19th January, accepting the appointment of Yves Fortier, a former Canadian ambassador to the UN, as mediator, and outlining several steps to be taken in future talks.
Gabonese president Ali Bongo Ondimba and his Equatorial Guinean counterpart Teodoro Obiang Nguema Mbasogo are expected in New York this week to meet with UN Secretary General Ban Ki-moon. The dispute will be discussed in meetings scheduled for 24-25 February, according to Gabon's presidential office.
The dispute concerns Mbanie, Cocotiers and Congas, three small islands in Corisco Bay, just north of the Gabonese capital Libreville, near the border with Equatorial Guinea.
The dispute first emerged when Gabonese president Omar Bongo Ondimba went to the Mbanie island to raise the Gabonese flag in 1972. The two countries almost went to war then and the dispute has been simmering away quietly since and has prevented oil companies from carrying out a full exploration of the nearby offshore waters.
It reemerged February 2003, when then Gabonese defence minister and now president, Ali Bongo Ondimba, son of then President Omar Bongo Ondimba, visited the Corisco Bay islands and reasserted his country's territorial claim to them.
When Ali Bongo visited Mbanie, a 30-hectare island inhabited by a handful of fishermen, and declared it part of Gabon, there was a swift reaction from Equatorial Guinea.
Then prime minister Candido Muatetema Rivas said in a radio broadcast: “My government expresses its deep concern and its indignation vis-a-vis Gabon's illegal occupation of the small island of Mbanié.”
The African Union and UN then intervened to try and resolve the dispute before rising tensions got out of hand.
The Corisco Bay dispute is the latest of several border quarrels to arise in Africa, where hopes of finding oil have encouraged both sides to dig in their heels.
Nearby Nigeria has been arguing with Cameroon for years over the disputed Bakassi peninsular and hopes of finding oil onshore have exacerbated Ethiopia's border dispute with Eritrea over the small town of Badme. Ghana's large offshore finds have created a dispute over its previously settled maritime boundary with Cote d'Ivoire.
Gabon and Equatorial Guinea are already major oil exporters and it is likely that the disputed waters hold large commercially exploitable reserves.
Gabon, whose oilfields are mainly operated by France's Total is a mature oil producer which is struggling to maintain its current output of 250,000 barrels per day.
A diplomatic source familiar with the region said that France, the former colonial power, had in the past lent strong support to Gabon's claim to the disputed islands, which could hold the key to bolstering Gabon's falling reserves.
Equatorial Guinea, on the other hand, only discovered oil in 1995 and is increasing its oil and gas production rapidly. It has already overtaken Gabon and is currently producing around 350,000 barrels per day.
Whereas France controls the oilfields in Gabon, Equatorial Guinea's offshore oilfields are mostly operated by the US oil giants ExxonMobil, Amerada Hess and Marathon.
The US is keen to get disputes in the region resolved, as it tries to reduce its reliance on oil supplies from the turbulent Middle East. While UN mediation is a step in the right direction, it is no guarantee of settlement: while the International Court of Justice ruled in Cameroon's favour on the Bakassi Peninsula in 2002, the dispute remains unsettled.
Sources: Irin, Xinhua
For more information, see the Menas Borders website, here.
Posted by menas borders at 03:17